IDGC of Centre spent over 6 billion 554 million rubles (including VAT) on the implementation of the investment program of the first half year. In the first half of 2013 the company put into operation more than 1,700 kilometres of power lines, having exceeded the plan by 17%. 314 MVA power was commissioned, which exceeded the original plan by 35%.

The major investment projects were implemented in the Belgorod, Lipetsk, Smolensk and Yaroslavl regions.

In the Belgorod region in the first half year one of the most important investment projects was the construction of power grid infrastructure in residential private habitation. Development of «Belgorod agglomeration» is one of the priorities of the region’s development designated by Governor Evgeny Savchenko. During the six months Belgorodenergo provided the capability to connect to networks over a thousand sites, having constructed about 100 km of 0.4-10 kV power lines and installed 13 transformer substations with a total capacity of 2 MW. Power supply for new housing estates is performed using components of the «smart grid»: pole-mounted transformer substations, AMR.

Overall, in the first half year the branch constructed 353 km of power lines, commissioned 48 MVA power, having exceeded the plan by 23 and 10%, respectively.

In the Lipetsk region in the framework of implementation of the investment program a large-scale reconstruction of several key supply centres was completed that provide system reliability of the entire region. During the upgrade transformers were replaced at the facilities, thus the power was increased, switch-gear cubicles were installed with microprocessor-based protection and automation panels, and modern vacuum circuit breakers and gas-insulated switches were implemented. The reconstruction, in the first place, will provide electricity to new consumers of rapidly developing areas of the region, greatly improving the reliability of power supply. As a result of modernization in the current year the failure rate of the branch fell by 52.5% compared to the same period in 2012, its losses — by 5%.

In Smolensk, a significant part of the investment program was aimed at the realization of the target «Preparation program for the celebration of the 1150th anniversary of the city of Smolensk», approved by the Decree of the President of the Russian Federation. Given the particular historical and cultural significance of the event, the work on power supply and grid connection of facilities, being constructed or reconstructed within the celebration, was included by IDGC of Centre as a priority. For the six months Smolensk power engineers constructed 252 km of the electricity grid, and commissioned more than 21 MVA power. Among other things, grid infrastructure was installed for the Smolensk Academy of Physical Culture, Sports and Tourism, the equestrian school of Odintsovo, the Smolensk Regional Puppet Theater, the Zoo, the State Archives, the Trauma Centre, the Oncology Centre, a city’s gymnasium for gifted children, etc. 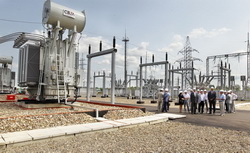 In Yaroslavl, the new 110/10-10 kV substation «Novoselki» was put into operation — one of the most technologically advanced in IDGC of Centre. The investment amounted to 270 million rubles. The new facility allowed to create the necessary power reserve and production potential not only for the industrial park «Novoselki», but for the most promising and actively developed Frunze district of the city.

The investment program of IDGC of Centre is aimed, first of all, at the reconstruction of power facilities ensuring the reliability of the power complex of regions in the service area of the company, the development of grid infrastructure required to provide new community facilities.