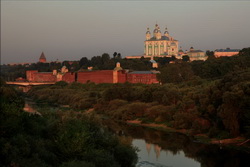 In preparation for the celebration of the 1150th anniversary of Smolensk, to be held in September 2013, Smolenskenergo’s power engineers have completed the first phase of the project on reconstruction of power grid infrastructure of the embankment of the Dnieper River along the architectural ensemble «The vallum».

As part of the reconstruction the company pioneered the use of technology to lay the cable under the river bed. (Prior to that, the cable ran directly along the bottom, which did not provide a high level of reliability of power supply). With the installation of horizontal directional drilling tubing of low pressure polyethylene PND-150/10 was laid under the bottom of the Dnieper. Smolensk power engineers had to cope with a sharp, up to 25 metres below the bank slope, elevation of the working site. They used a cable with aluminum conductors having paper insulation impregnated with a viscous composition that does not flow, lead-shielded with protective covers. This type of cable has a special anti-corrosion resistance. Cable manholes were also installed to serve the connecting cable joints. This technology allows for the possible damage to the cable quickly to replace the required section. The new cable connects the power grid infrastructure of Zadneprovsky and Leninsky districts of Smolensk to the 110 kV substation «Central», which feeds socially important facilities of the historic city centre.

In parallel with this work the removal of five lines of electric networks of the site was carried out on which the building of the new promenade runs. Given the high social importance, the power engineers performed all the work in a short time and without de-energizing consumers.

The reconstruction of the embankment of the Dnieper is part of a large-scale program of preparation for the celebration of the 1150th anniversary of the city of Smolensk, implemented on the basis of the Decree of the President of the Russian Federation. The complex project involves strengthening the bank slope under the foundation of the architectural ensemble «The vallum» and building a new waterfront with viewing sites, boat ramps, landscaped areas, infrastructure facilities, and construction of a pedestrian-connection bridge.