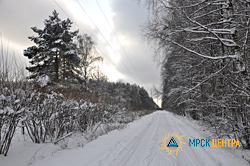 The electric grid complex IDGC of Centre during the New Year peak loads operated steadily, in its normal mode, with a normal scheme of power supply. During that time no significant interruptions in the grids were recorded.

To ensure reliable and smooth operation the company organized around the clock duty of managers and decision-makers, established a special supervision of the substations and power lines, the equipment, which had been for the planned repair, was switched on.

1362 first responding mobile crews totalling 7180 people and 2050 special vehicles were on high alert. For the prevention of emergency situations a thorough technical condition inspection of all equipment, availability of relay protection, communications, supervisory and process control systems was performed, and emergency control systems were checked.

Headquarters of responsible managers and specialists of IDGC of Centre daily interacted with Headquarters of the electric grid complex, territorial divisions of EMERCOM, executive bodies, enterprises of FGC UES, operating companies of IDGC Holding and other territorial power grid organizations.

The company’s Contact Centre was also on high alert, operators received calls on the single Direct Power Hot Line at  For the holiday season the number of operators per shift was increased — up to 20 people, other 16 people were on duty around the clock. On the eve of long holidays an additional check of VPN hardware fail safe operation was performed, which provides the work of operators of the Contact Centre at home during mass-volume calls of citizens to the phone during interruptions. In this case, IDGC of Centre was ready to deploy temporary information centres.