In 11 regions of Central Russia, where IDGC of Centre operates, the historical and memorial event “Relay Banner of Victory — 2012” is taking place

The action, initiated by IDGC Holding, was launched on the eve of Victory Day across Russia. It is the third consecutive year. In 2011 the action began at the Museum of the Armed Forces of the Russian Federation. That was there where representatives of the Board of Veterans of branches of IDGC of Centre were handed over the replicas of the legendary banner — Attack Flag of the 150th Order of Kutuzov of II degree Idritsky Infantry Division, hoisted on the Reichstag building in Berlin in 1945. After they visited all the regions of the service area of IDGC of Centre, the replicas of the Victory Banner were placed for eternal storage in each branch of the Company.

This year’s Relay significantly is expanding its geography — the sacred relic will be delivered to 278 districts of the Central region of Russia for storage in museums and Corners of Fame in all Districts of Electrical Networks of branches of IDGC of Centre.

One of the first regions, where the replicas of the Victory Banner were delivered to, was the Belgorod region. On the eve of Victory Day at the site of Belgorod State Historical-Artistic Museum-Diorama “Battlefield of Kursk. Belgorod direction” a solemn ceremony of handing over the Victory Banner to all Districts of Electrical Networks of IDGC of Centre -Belgorodenergo division was held. 22 exact replicas of the sacred relic were handed over to veterans-power engineers. 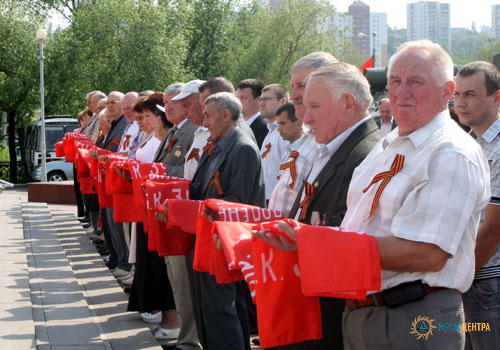 The ceremony was attended by the heads of the branch, deputy mayor of the city of Belgorod Alexander Garmashev, president of Belgorod State Institute of Culture and Arts Irina Ignatova, deputy chairman of regional branch of Voluntary Association for Assistance to Army, Aviation and Fleet of Russia in the Belgorod region Victor Pogrebnyak, chiefs of 22 Districts of Electrical Networks of Belgorodenergo, members of the Youth Council and the Board of Veterans of Districts of Electrical Networks of the branch. World War II veterans and home front workers were the guests of the memorial and patriotic rally.

“Belgorod is a city scorched by war, so for us, Belgorod residents, the feat of the soldiers during the Great Patriotic War is especially valuable. It is our duty — to keep the flags handed over as a symbol of remembrance of the heroism of our fathers, grandfathers and great grandfathers. We must be worthy of their feats,”- stressed Alexander Garmashev. Chairman of the Youth Council of IDGC of Centre — Belgorodenergo division Vladislav Stotsky addressed to the veterans with hearty words:" What is the Banner of Victory for the youth? This is a tremendous symbol of perseverance, courage, heroism, courage committed in May 1945 by our peers. It is a symbol of the bloodiest of the war, the hardest and most long-awaited Victory! For the younger generation of power engineers it is very important that the symbol of Victory will be stored in each District of Electrical Networks. This is our pride, honour and glory of our nation. We will always remember that without this Victory we would not have had any peaceful and bright present“. 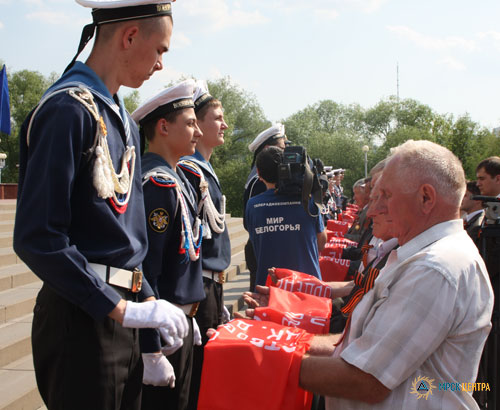 Chairman of the Board of Veterans of the branch Ivan Shevchenko handed over the replica of the Victory Banner in the Orel region to IDGC of Centre — Orelenergo division director Alexander Letyagin.

In the Lipetsk region the replica of the Victory Banner was handed over to Lebedyansky District of Electrical Networks. The ceremony took place at the memorial complex “The high point of Cucumber”. It was there in Volovsky district where from December 1941 to January 1943 the fierce fighting took place, during which more than 5,000 Soviet soldiers killed. Another replica of the Banner was handed over to Eletsky District of Electrical Networks in the parade on Red Square in the city of Yelets of the Lipetsk region. 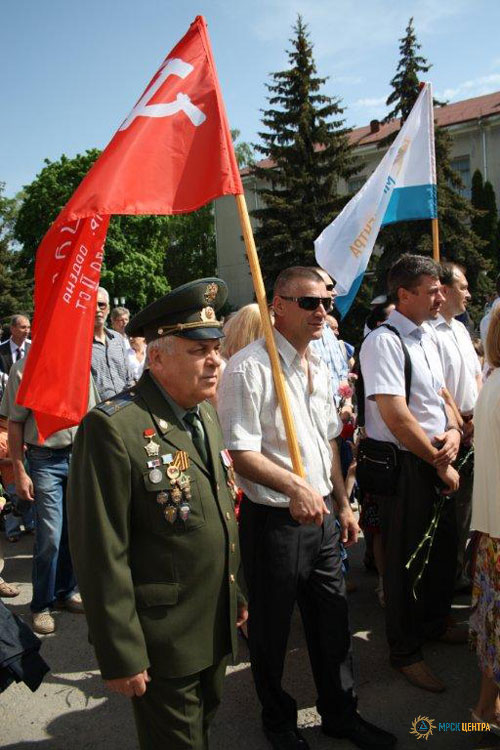 On the territory of Temkinsky district in the village of Bekrino of the Smolensk region, in the framework of the action “Homeland of feat — to Homeland of the Hero” power engineers of IDGC of Centre unveiled a plaque dedicated to the Heroes of the Soviet Union, the natives of this land. 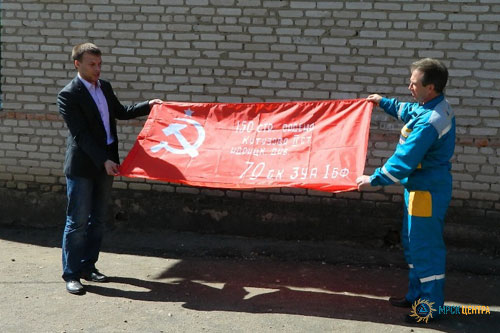 Georgy Gromov, Viktor Mironov, Vasily Filatenkov and Evgraf Ryzhov, — the names of the heroes were carved on a marble tablet, which now hangs on the wall of a local school. Georgy V. Gromov and Viktor P. Mironov — fighter pilots, they committed their heroic deeds in the territory of the Murmansk region. On the account of each of them — at least 20 shot down enemy aircrafts.

Currently there are negotiations between the municipalities of Temkinsky district and the city of Murmansk on the conclusion of an agreement to perpetuate the memory of heroes. As part of the celebrations an exact replica of the Victory Banner was given to Chief of Temkinsky District of Electrical Networks for perpetual storage.

“Relay Banner of Victory” — the most important historical and memorial event not only for the Russian power industry: it was a remarkable patriotic event in all regions of Russia", — stresses Director General of IDGC Holding Nikolay Shvets. — The Banner of Victory demonstrates the continuity of generations and the inextricable link with the heroic past, filling each employee of the distribution grid complex with a sense of pride for the immortal feat of the people in the Great Patriotic War".

The Relay of the Victory Banner is continuing its march through the territory of the service area of IDGC of Centre. All branches and Districts of Electrical Networks of IDGC of Centre held a solemn meeting and ceremony of handing over military relics, meetings with veterans, schoolchildren and students. The Relay will end June 22, the Day of memory and grief. On this day in many districts the Relay’s participants will plant trees of memory — the land will be brought from all places through which the Banners pass, where will Watches of Memory will be held and commemorative steles in honour of the Relay will be laid.