An All-Russian production meeting with Heads of IDGC/DGC took place in IDGC Holding, dedicated to summarizing the operation of electric grid companies during the autumn-winter period For the uninterrupted and reliable power supply to consumers during the autumn-winter period operation Director General of IDGC Holding Nikolay Shvets gave a letter of gratitude to General Director of IDGC of Centre Dmitry Gudzhoyan.

“In preparing for the winter, — stressed Nikolay Shvets — we performed not only a large amount of physical work within the maintenance and investment programs, but also took a number of system-level measures that take into account all our experience, bring the work to improve the reliability of electricity supply to a qualitatively new level”.

In preparation for the winter the lessons learned in the previous year were extensively reviewed, the analysis of faults was made, the Action Plan was developed electrical grid facilities, which reflected all the factors influencing the operation during the heating season. 2714 activities were scheduled in IDGC of Centre for implementation. The priorities for the power engineers were the performance of repair and investment programs, the increase by 1.5 times, compared with last year, of the amount of ROWs clearing, the preparation of equipment for operation at low temperatures. The bulk of the work had been completed by the beginning of the autumn-winter period. Thanks to the performance of work to clear and expand ROWs the number of faults due to falling trees onto conductors has declined against last year’s autumn-winter period almost two-fold. The total number of interruptions compared to the previous period decreased more than 4 times. This was achieved despite the increase (by 2, 54%) in the electricity consumption and power in the Central region of Russia. The facilities of Belgorodenergo and Lipetskenergo reached their historical maximum power consumption. 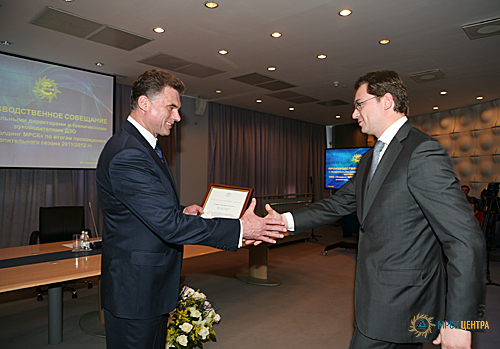 Guided by the principle of corporate social responsibility, all subsidiaries of IDGC Holding, including IDGC of Centre, make an effort to restore the forest balance that is infringed under the influence of anomalous natural factors. Across Russia large-scale compensatory planting of trees and other greenery has been organized. Over 25,000 trees have already been planted on the territory of the service area of IDGC of Centre in 2012.

Particular attention in preparation for the autumn-winter period was paid to training personnel to prevent electricity interruptions, working out clear joint actions for restoration. As part of this work cooperation agreements were signed with a number of subsidiaries of IDGC Holding, FGC, regional TGOs, and territorial divisions of MOE.

In the service area of IDGC of Centre 90 mobile crews were made numbering 520 people equipped with vehicles, the most modern machinery and tools to perform emergency — restoration work.

During the autumn-winter period 2011/2012 operation, in the period of the elections to the State Duma of the Federal Assembly and the President of the Russian Federation, IDGC of Centre provided a reliable electricity supply to polling stations. Following the election campaigns the power engineers received in their name many letters of gratitude from governors, heads of municipal administrations, chairmen of election commissions and heads of organizations.

“The autumn-winter period is completed, — stressed Nikolay Shvets — but we are already preparing for the new one. The management methods and control system will be perfected to improve the reliability of power supply”. 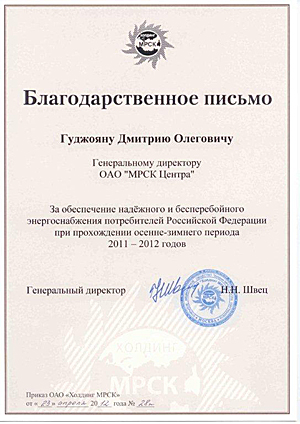