The opening ceremony of the Youth Innovation Centre (YIC) was held in IDGC of Centre — Belgorodenergo division. Its creation is a part of the implementation of the orders of Russian President Dmitry Medvedev after his meeting with young scientists on February 8, 2011. The project to open YIC in Belgorod was discussed and supported at a working meeting of General Director of IDGC of Centre, a member of the Coordinating Council on Youth Affairs in the scientific and educational fields under President of the Russian Federation, Dmitry Gudzhoyan and Governor of the Belgorod region Evgeniy Savchenko.

The idea of ​​creation of the Youth Innovation Centre was also suggested on June 10 this year at a meeting of the Scientific Department “Energy Security Issues”, which is chaired by General Director of IDGC Holding Nikolay Shvets. At the meeting it was discussed about the need to optimize the process of implementing new technologies into operation, improving communication between higher education institutions engaged in scientific development and young employees of the company. By all accounts, the Youth Innovation Centre in Belgorod will be able to become one of platforms for implementation of this idea.

Belgorod Region is a recognized leader in the Central Federal District in terms of socio-economic development. In 2009 the city of Belgorod became a member of the consortium “smart cities” — a global forum for cooperation and promotion of smart technologies in the development of urban infrastructure. On the basis of Belgorodenergo IDGC of Centre fulfills many innovative projects. Most of these decisions then find their application in grid utilities in Central Russia. Business — incubators were created and operate successfully in four higher education institutions in the region, aimed at implementing high technologies in operation, attracting students and researchers to address these issues, as well as stimulating development of small innovative companies. This set of activities is a platform for further efficient work of the Youth Innovation Centre.

The range of topics to be addressed by YIC Belgorodenergo is wide — from projects to reduce electricity losses in the grid of the company to improvement of the system of technical and commercial electric energy metering. YIC plans to perform collection, aggregation and testing of innovative ideas of initiative employees of the division to use scientific potential of the region in their developments. Particular attention will be given to energy saving and energy efficiency.

The first project is an interactive exhibit center, which is located in the Customer Care Centre of Belgorodenergo. It provides information on how to save energy, patterns of energy saving technologies and materials. With the exposition customers can learn more about the use of metering devices, enabling the change for “day-night” rate, infrared heating, energy saving lamps, reactive power compensation devices, energy-efficient home appliances and alternative energy sources. 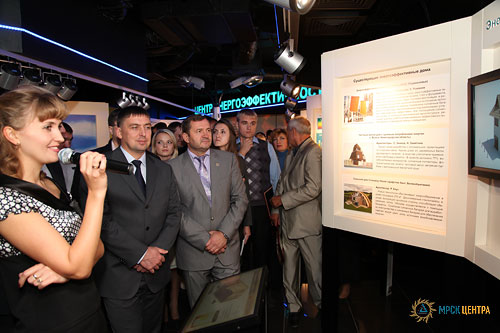